When I see this kind of behaviour, I start to wonder… WTF?

What if everything in the world went down (or there was a major national grid outage, or similar, or Openreach forgot how to run a fibre network)?

What if someone dropped an aircraft on a regional power distribution centre?

What would happen to my extensive audio and video media library?

What would happen to my data?

Well, there’s only one way to find out (in a simulated kind of way, obv).

But first, before I did anything drastic, I plugged in my nice new shiny UPS unit.

And then I went to the MCB and flipped the switch.

And went to bed.

After six hours sleep I made tea and inspected the devastation and began reading the various server/device logs.

The router was dead, obv, but the NAS (in its capacity as DHCP router) was still up and showing full signs of alertness.

I could plug a monitor and keyboard directly in to HP Server A (I really need to name these things) and HP Server B and access the various media and data stores that are spread across these devices.

I could plug a laptop directly in to the NAS and access the operating system as an administrator. I could also access a partitioned area of the volume and and pick up any/all of the weekly contingency backup that was tucked away there.

And if I had integrated the router in to this setup, my WiFi and local area network would have been up and running for me to do all of these things from the comfort of my own bed.

But I deliberately left the router out of the protected environment, because it wouldn’t have been a real test, would it?

I took the quiet time as an opportunity to deploy a WordPress upgrade across the WP estate, and I triggered a non-standard backup on to my emergency external device.

Then I restored power.

The router came back up (logs showed no issues), and the local area network popped back in to place around the infrastructure.

And the UPS stood itself down and resumed charge mode.

So yeah, that was a pretty good test.

All server and system logs show no problems, and the router log merely records a hard shutdown.

I may be preaching to the converted on this but…

However, the more time I spend with it, the more I realise that WordPress has shortcomings, here and there.

It’s a pros and cons argument.

Yes, there is a very large user community developing features and facilities for the (functional and non-functional portions of the) application.

And this is good. This huge, hardcore team of developers are continually turning the WordPress product in to a much more sophisticated tool.

But there are also some naughty people out there, attempting to bugger up some people’s WordPress installations.

Just for a laugh.

When I was in LA three years ago, one of my WordPress-based websites was hacked.

It was a relatively straightforward task to get in to the back-end and fix the website. It was just frustrating that it had happened.

Though, interestingly, I believe I would fix the problem in a much simpler way these days.

But here are a couple of simple golden rules that everyone should undertake to protect their WordPress environment:

And while I’m on the patronising subject of the blindingly obvious:

But don’t worry about deleting your admin user if you have been posting from content from it – you can just assign your new author/contributor user as owner of the legacy content, and then you don’t lose anything.

Maybe you already know these things.

But we’re never to old to learn, are we?

It’s a shame that I can’t set a ‘deny by IP address’ rule in my router, but sadly I can’t.

Last week I did manage (don’t ask) to create a port-based rule in my router.  The rule automatically rejects any request to access a specific list of ports.

So the only requests that the NAS (in its role as secondary firewall) has to process now are port 80 (and other common http-based) requests.

For the last week the CPU utilisation on the NAS has firmly remained steady in the 7-15% band. 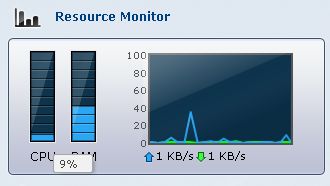 So is that it?

Have I made hosting in to a trouble-free zone?

What are Tech Mahindra playing at?

The memory test results came back from Synology. The results were both conclusive and inconclusive.

They proved that the environment is stable and not under any strain. But they were unable to demonstrate why CPU utilisation was close to 100%.

There were no rogue (or non-rogue) services or processes spinning (and thus eating up CPU).

There were no jobs ticking along in either TSR or background.

And there were no previously unknown index-based utilities doing indexy-related things.

So it was a bit of a mystery as to why CPU should be almost maxed out (yet delivery performance was unaffected by the high-90%s utilisation – because, remember RAM utilisation was in the normal band).

I spent a couple of days wondering what could eat up CPU let leave RAM relatively untroubled.

I was travelling to work, a few days ago, when I remembered a conversation I had with my friend Avril, many years ago – about processing architecture and IP packets.

Avril was a network genius. She holds a number of networking patents, and has worked at BTs R&D division in Suffolk in a senior capacity. She also lectured, part time, at UWE on Real Time Information Systems.

We had a conversation, years ago, about processor architecture and how some types of processors are designed to dump processes in to RAM, whilst others will handle simple positive/negative steps themselves.

It’s as clear as crystal, if you remember the big RISC v Intel debate.

I looked up the architecture specs for the processors in the NAS and discovered that they are designed on the RISC SPARC model.

So it was entirely possible that the processors were performing simple RAM-type processes, without actually dumping them in to RAM to be dealt with there.

On the way home I decided to check the router logs.

A look at the router logs confirmed what I’d thought: I was under a DDoS attack.

The router was stopping 95% of the probes, but the 5% that were getting through were enough to be eating up almost all of the CPU. The NAS was rejecting the 5%, but that yes/no process was where the CPU utilisation was going.

At the peak of the attack the router logs indicated that my infrastructure was receiving c. 500 probes per minute – so many probes that the router log couldn’t record them all, it was filling up and over-writing itself every few minutes.

Unfortunately, effective though the router’s firewall is, it isn’t configurable, so I have to rely on its defaults, and beef up the second layer of security on the NAS (which I’m using as secondary firewall and DHCP server/router).

So I figure that I just have to sit tight and wait out the DDoS attack.

But here’s a thing.

Do you know how much traffic your internet router is receiving?

I doubt many people bother to check.

But crack open the logs and have a look. I’m betting you’ll be surprised at what’s going on behind the scenes.

In an attempt to get to the source of the 100% CPU utilisation, I had a word with Synology support.

They got back to me with a suggestion of a memory diagnostic which I ran earlier this evening.

Watch this space for further updates!

(ps: ironically, the 100% CPU utilisation issue has not reared its ugly head since)

I have been less than impressed with Ghost (the platform, not Drift Ghost HD, my new video camera, which is excellent!). It has left me with a strong aftertaste of mediocrity. I understand the concept, but if you strip away the aspirations, really it has no significant advantages over Drupal or WordPress (and has some fairly hefty disadvantages).

Subdomains (both leading and trailing) were actually much easier to get a grip of than I thought they would be. The simpler method, where there is a need, is to deploy trailing subdomains, but I do understand why the geeky amongst us would prefer leading subdomains.

I had initially set up one of the HP servers, but both are now up and running. I have some test MySQL databases on one, a couple of test domains on the other and I’m experimenting with the split of data (between ‘A’ and ‘B’ boxes).

But every now and then latency creeps up and can run up from an operating level of +90ms to as much as +3s.

I need to sit down and figure out where this is springing from and why it’s a periodic issue. No packets are being lost, so it’s not as if the routing is being dropped, just slowed down. I have also noticed that sometimes the CPU on the NAS rises to 99% utilisation from the customary 15-25%. But when it does peak that high, the RAM utilisation scarcely gets over 35%.

Anyway, I’m sure the routing thing is fixable and probably needs nothing more than some fine-tuning. I’d like to sit down and check my IP addressing. But as ever, this all needs time and there isn’t too much spare time knocking about, at the moment.

Not on the ‘pending’ list, but I have spent a lot of time (almost all of this weekend) consolidating data from a multitude of backups.

Over the last six years I’ve burned out three laptops (or hard disks in laptops).

Before I bought the NAS I undertook a weekly global backup of my laptop(s), all the way back to 2008. To accommodate these backups, I bought three external HDDs (one 500Mb, the other two 1Tb each).

So this weekend, while the weather has been absolutely pants, I’ve been consolidating the data from these individual devices on to the ‘A’ HP server.

This consolidation hasn’t really increased the data footprint on the ‘A’ server very much, but it has freed up three fairly large external HDDs. I have no idea what I’m going to do with them, but I’m sure I’ll think of something.

(a nice side effect of the data consolidation is that my iTunes library has now risen to 7,500 songs)

Earlier this evening I had a look at the router log.

I don’t know enough about IP traffic-types to be able to read the log and determine what it all means.

But if you do, could you drop me a line?

Here’s an excerpt. If you look at the timings, you’ll see what I mean by *a lot*!